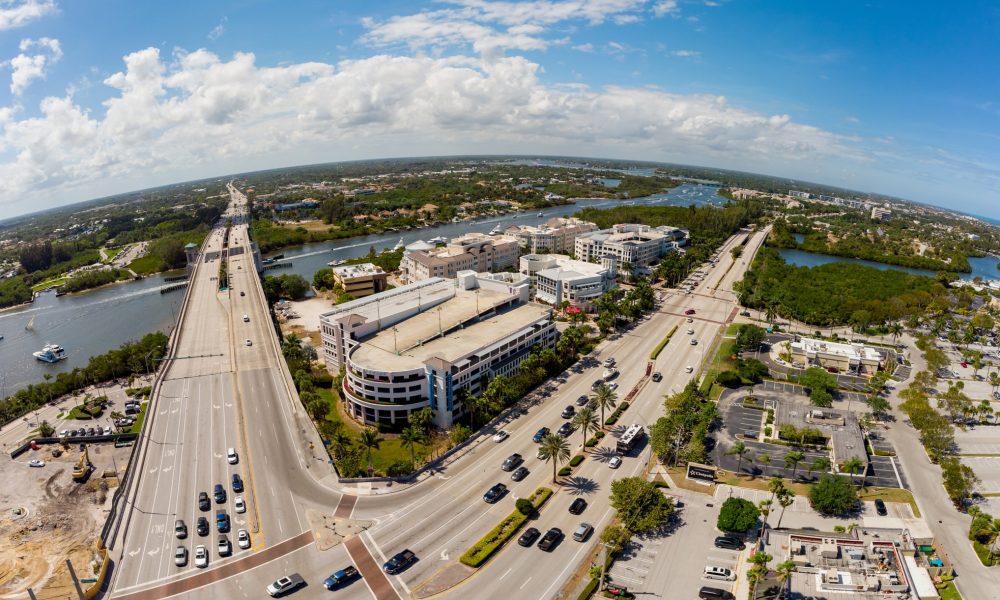 How does a failing mall, designed to breathe life into a sleepy coastal town, rise from the ashes of empty lease spaces and law suits?

You may have noticed that a big attention-getter in local business news is the plight of a struggling mall. While this is never good news for either the community, the developers or the local shoppers, it is not a unique story, nor does the mall itself necessarily carry the blame for its predicament. According to Forbes, “Retail vacancies are rising, and shoppers are thin on the ground. Whether the vacancies are causing shoppers to be scarce or the reverse, the two trends are converging to jeopardize the future of many of the nation’s 1,200 malls.”

Case in point, a current hot topic in the Palm Beaches of Florida is the story of the Harborside Mall in Jupiter, an optimistic land use venture that now struggles against lawsuits and empty retail spaces.

Situated at the corner of U.S. 1 and Indiantown Road, and facing the Intracoastal, Harbourside Place was poised to be the center hub of shopping and nightlife in Jupiter, housing restaurants, a hotel, an amphitheater which hosts live acts, and a multitude of shopping options. However, as reported by the Palm Beach Post, Harbourside’s value is depreciating. Since it opened in 2014, the face of retail has changed drastically. The COVID-19 pandemic has pushed millions of retail customers online. Currently, the 5-acre waterfront property is worth $54.6 million based on 2021 tax assessments – down from $73.3 million in 2015, the year after it was built.

Along with its many marinas and restaurants, the communities along the Palm Beaches take advantage of the pleasant seaside ambiance by playing host to numerous public ventures. Two popular and unique spaces that continue to successfully draw substantial local traffic are the Waterfront Commons Park and the Old Key Lime House.

Waterfront Commons is a triangular waterfront park located at Flagler Drive and and Clematis Street in downtown West Palm Beach. An ample walkway makes strolling the well-planned park most enjoyable as it wends besides fountains, a Parisian-style plaza, and the Great Lawn. The venue also includes event space, three floating docks, shaded gardens and two community buildings, and is home of the award-winning concert series, Clematis By Night, which has been providing the community with free concerts for nearly three decades.

The Old Key Lime House in Lantana is practically a South Florida institution. The popular mainstay currently boasts over 1,000 Yelp reviews and was ranked number one out of fifty-seven restaurants in Lantana.  As noted by The Coastal Star, it was built in 1889 and it’s the oldest restaurant in Florida. The unique venue is situated along the waterway and serves food and drinks both indoors and outdoors on multiple decks. When the sun goes down customers sit seaside amidst a constellation of colored lights and can watch sports games on a giant movie screen set up in the water.

Allied Capital and Development of South Florida, LLC proposed the Harborside Place development project in 2005. It was the brainchild of developer Nick Mastroianni II who said he was building a “Mizner Park on the waterfront that would attract boaters, shoppers and tourists – and create hundreds of jobs.” Mizner Park is located in Boca Raton, and, like Jupiter, it is one of the most affluent areas in Florida.

Mizner Park, a high-end shopping, residential, and entertainment district, consists of a collection of shops, restaurants and luxury apartments built in a Mediterranean Revival architectural style, as well as, a luxury iPic Movie Theater, and dozens of local boutiques and services. The Centre for the Arts, located on the north end of the development, includes an amphitheater and the Boca Raton Museum of Art.

With a similar vision of recreational largesse, the Harbourside site plan was finalized in 2008. However, with the economy in a recession,  Mastroianni scrambled to find financing and ended up using the EB-5 program, a federally-authorized visa category created by Congress in 1990 to encourage foreign investment in job-creating U.S. economic development projects or companies in return for a U.S. green card.

The storyline, as recently updated by The Palm Beach Post, is that a contentious relationship arose and continues to exist between the Town of Jupiter and the Harborside development, specifically regarding  concert noise, parking waivers and fines. The largest point of dispute being the complaints from residential communities that are close enough to hear noise from its amphitheater during concerts, a problem since its opening in 2014. The Town of Jupiter started fining Harbour Place in 2015, specifically, $16,500 for a reggae concert, and months later banned concerts on Sundays. A lawsuit was filed in 2016 in state court and was later moved to federal court in 2018, where Harbourside sought a preliminary injunction to stop the Jupiter sound ordinance. The request was denied and the ordinance was ruled constitutional.

In 2018, seventy-eight Chinese investors reportedly,  filed a complaint against Nicholas Mastroianni II, alleging the Jupiter developer and EB-5 fundraiser attempted to defraud them of almost $100 million in EB-5 investments. Harbourside Place denied the allegations, arguing that a majority of the development’s investors have not sued and continue to support the project.

Beginning in November of 2019, Harbourside sued three tenants for over $1.4 million, alleging they violated their leases. The total included $1 million for unpaid rent and other costs in the Venetian Nail Spa case, over $152,000 in the Native Visions Galleries suit and at least $266,000 in the Too Bizaare suit.

In 2019 the Town of Jupiter town, having fined Harbourside Place $300,000 in code violations, agreed to allow the venue to hold certain events without a special permit and Harbourside agreed to pay $40,000 in fines, in lieu of the $300,000.

Last June, the Town Council agreed to pay over $300,000 in withheld tax incentives to the development, and consider a new master plan of corrective measures from developers. However, as of their most recent meeting on October 19th, the new plan was not voted on by the Town Council, which would have ended the conflict with its settlement agreement. Council members said “they couldn’t OK a plan when they have issues with noise, parking and jet-ski rental.”

Disappearing retailors is not only a concern for the developers, it’s also a very real concern for the community, and for good reason. In a worst-case scenario, a Class A mall left abandoned can drive the economy down because not only is the the dead space not contributing as much in property tax, it eliminates hundreds of jobs, and also stigmatizes the area for neighboring businesses and potential developers.

Is There a Second Life for a Failing Mall?

The answer is yes, according to Kevin Robinson, author and journalist for the Pensacola News Journal, who says failing malls in some communities are taking on second lives as governments, developers and citizens find new and creative ways to retrofit, reclaim, redevelop, re-inhabit and regreen the spaces. However, many suburban retrofitting projects result from public-private partnerships, and often the biggest hurdle is a city’s own regulations.”

It appears by the recent action taken by Harbourside Place, the development is taking steps in the right direction. After years of head-butting over the Town of Jupiter’s city ordinances, their latest move is one of compromise with the town, and includes a new business strategy that responds to the issue of failing shopping malls.

Harbourside’s developer, Nicholas Mastroianni III recently presented the Town of Jupiter with a new master plan offering corrective measures for its failing retail leases and on-going disputes with the town, where the development will stress outdoor dining and small gatherings as a way to rebrand itself, while stabilizing its economic base with office space rentals. The new plan includes:

As of their October 2021 town meeting, the Town of Jupiter voted to postpone the settlement saying “they couldn’t OK a plan when they have issues with noise, parking and jet-ski rental.”

At Rabideau Klein, our experience with land use and building construction is significant and we have successfully represented clients before municipalities with many intricate regulatory and compliance issues. David E. Klein, Esq. and Guy Rabideau, Esq. are Florida Bar Board-Certified Real Estate attorneys. Contact Rabideau Klein to discuss your Palm Beach real estate legal needs.

Previous Post
When Do You Need a Lawyer at a Real Estate Closing?
Next Post
Ten Most Prestigious Courses in Florida’s Golf Capitol