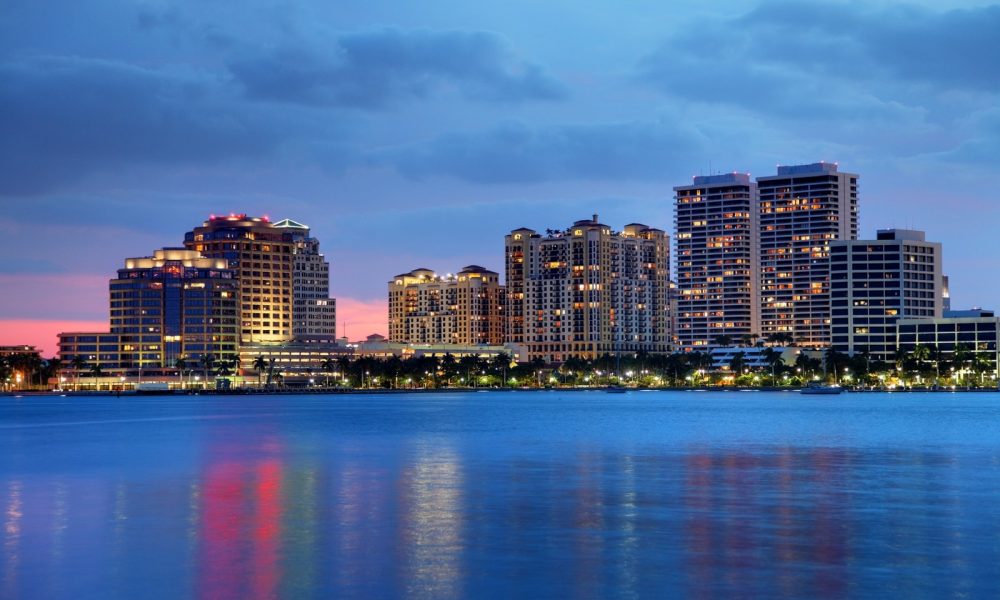 Two South Florida counties are poised to commence three exciting development projects that will dramatically change their cities’ skylines, and while there is no business relationship between them, the developments are all associated with the Floridian founding father’s name, Henry Flagler.

In Broward County, the city of Fort Lauderdale has just reviewed plans for a soaring, 45-story residential space, and in Palm Beach County, Flagler Residential developers are breaking ground in West Palm Beach for one of two iconic new structures slated for the seaside city.

Composed of two 45-story towers, the Fort Lauderdale development, currently dubbed the DNA, would take up half a city block on the east side of Andrews Avenue, just a few blocks north of Broward Boulevard, in Fort Lauderdale’s trendy Flagler Village neighborhood.

The soaring height of the pair of proposed residential towers would dramatically change the skyline of Flagler Village, and also Fort Lauderdale’s skyline. At 448-feet-tall, the twin towers set will be the third tallest structures in Fort Lauderdale where the only two taller buildings are Icon Las Olas at 455-feet-tall, and the Las Olas River House at 452-feet-tall. The proposed development includes 612 multi-family residential units, 890 parking spaces and 75,000 square feet reserved for shops, restaurants, and offices, creating a mixed-use vibe with business, residential and retail.

There has been a development boom in Flagler Village as more people move to the north side of downtown Fort Lauderdale, according to a news article. More businesses have moved to Flagler Village to serve these new residents.

And in West Palm Beach, the construction of a luxury condominium tower complex on the Intracoastal Waterway is underway. The 300 foot-high, 24-story complex, known as Forte’, is being developed by Two Roads Development and Alpha Blue Ventures with the help of a $121.5 million construction loan provided by Arkansas-based Bank OZK. The loan was obtained by their corporation, Flagler Residential LLC, which also filed a Notice of Commencement (NOC) on January 5th  to begin foundation work for the project.

Located at the corner of 1309 and 1311 S. Flagler Drive and 134 Acacia Road, Forte’ will have 41 large condos with two units per floor. They will span three to four bedrooms and 4,200 square feet to 8,400 square feet. The tower will be capped by a six-bedroom, 8,976-square-foot penthouse with a 2,000-square-foot private rooftop deck complete with pool, summer kitchen and cabana bath.

Pre-construction sales have already hit 60 percent, with prices ranging from $6.7 million to over $30 million. The luxury tower would also have a second-story pool deck with a 75-foot lap pool, heated spa, and an outdoor dining and lounge area, as well as a third-story health and wellness space with a steam room, sauna, and private treatment rooms.

In addition to the Forte towers, the City of West Palm Beach just approved plans for another set of high-rise towers that have been designed to be the second tallest buildings in the city, surpassing the former tallest complex, The Plaza twin-towers, by 49 feet, and just 47 feet shy of the newly-built One West Palm multi-use towers located downtown, which reach 426 feet.

Frisbie Group and Hines of Houston have submitted a proposal for Flagler Towers, a pair of 379-foot-high luxury condominiums situated on Flagler Drive and designed by New York City’s Robert A.M. Stern Architects. The development will replace existing 57-year-old Palm Beach Atlantic University dormitories that are no longer in use.

Last September, the Frisbie Group filed applications with the Federal Aviation Administration to approve the 27-story-high project addressed at 1315 South Flagler Drive, and last June the West Palm Beach Plans and Plats Review Committee received a rezoning request from FH3 LLC, an affiliate of the Frisbie Group, to rezone the property from “multifamily high density” to “residential planned development.”

Not only will the two buildings be some of the highest standing, the 109 luxury units may also be the highest priced. The Palm Beach Post predicted they will “…become the most expensive condo complex in Palm Beach County, with units expected to fetch about $10 million each.” The construction is expected to cost more than $200 million, with a possible completion date of 2025.

Flagler is a name with a long history in Florida. Henry Morrison Flagler was a wealthy industrialist and one of the founders of Standard Oil who developed much of Florida’s east coast. He built Florida’s East Coast Railway from Daytona to Key West and constructed several successful hotels throughout the state. His efforts pioneered the development of Florida as a major U.S. vacation center and tourism spot. It is fitting that developers honor his name by continuing the tradition of building up Florida as a business and tourism mecca.