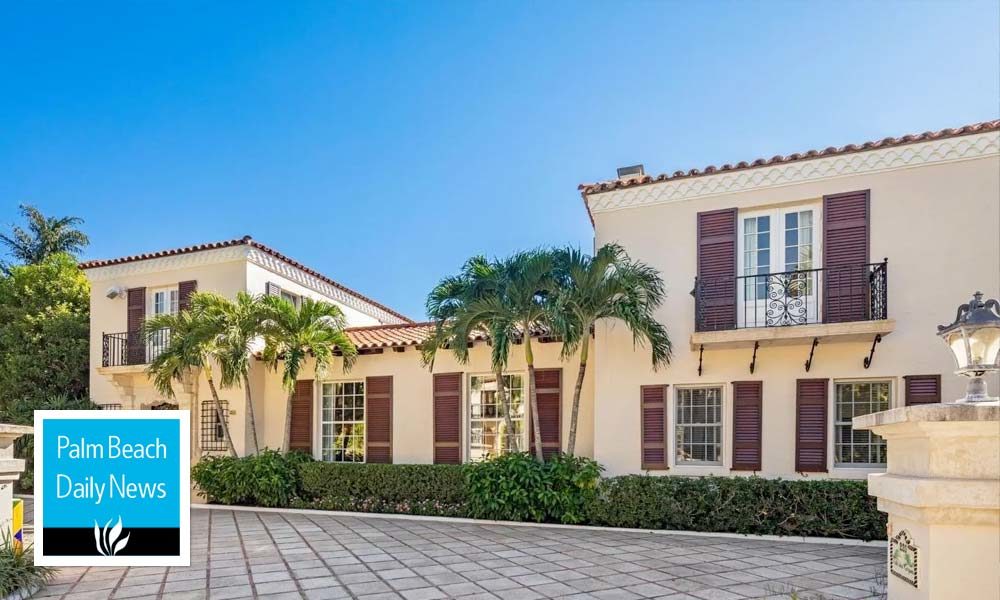 Real estate investors Michael J. Flynn and his wife, Anne, have sold, for a recorded $8 million, the landmarked house they owned for 13 years at 220 Via Bellaria, six blocks north of President Donald Trump’s Mar-a-Lago in Palm Beach’s Estate Section.

The deed lists the buyer as real estate attorney Guy Rabideau, acting in his role as trustee of the 220 Via Bellaria Trust. Rabideau also signed a $4.95 million, 30-year mortgage on the property June 18, the same day the deed recorded at the Palm Beach County Courthouse. Iberia Bank holds the mortgage.

Rabideau declined to comment about the sale or anyone associated with the trust.

Designed by noted society architect Maurice Fatio in 1929, the Mediterranean-style house has eight bedrooms and 10,125 square feet of living space, inside and out. The half-acre lot is the third one east of the lakefront.

The property was listed in November at just under $10 million and landed under contract by the end of May, according to the Palm Beach Board of Realtors Multiple Listing Service.

Corcoran Group agents Paulette Koch and Dana Koch co-listed it with seller Michael Flynn, who has spent more than 40 years in the real estate industry and is the broker at his eponymous real estate agency. Flynn couldn’t be reached for comment.

Agent Crista Ryan of Tina Fanjul Associates handled the buyer’s side of the deal, MLS shows.

With ties to Greenwich, Connecticut, the Flynns bought the property for a recorded $6.3 million in May 2007 from the estate of Robert Jenney, who died the previous year. The Flynns later homesteaded the house in the county tax rolls.

The sales listing described the two-story residence as a “gracious” house that had been “totally reimagined” and was in pristine condition. The layout’s three separate bedroom wings offer privacy for guests, the listing said. The house also features high ceilings, Cuban-tile floors, and pecky-cypress and wrought-iron details. In addition, “well-scaled” indoor/outdoor living spaces include a poolside loggia.

The town granted the house landmark protection in 2012. In a report prepared for the Landmarks Preservation Commission, former town landmarks consultant Jane Day noted that Fatio designed the house “at the top of his career” for Frederick Johnson and his wife, who were active members of Palm Beach’s social scene.

The Flynns own an ocean-block townhouse at 144 Hammon Ave., which they bought in April 2018 from Richard and Carolyn Sloane for $4.5 million. Michael Flynn represented himself and his wife in the sale opposite broker Kevin Sloane of Kevin Sloane Real Estate, who acted on behalf of his parents.

The Flynns have owned other properties in Palm Beach, including a house at 240 Seabreeze Ave. They bought that one in 2014 for $1.6254 million, completely renovated it and sold it in 2017 later for $3.1 million, property records show. The listing broker in the 2017 sale was Stephen Hall, then of Hall Real Estate but today with Compass South Florida. Sotheby’s International Realty agent Dragana Connaughton acted on behalf of the buyers, Robert P. and Jean Good.

Bradford P. Miller Real Estate handled both sides of the 2007 sale when the Flynns bought the house on Via Bellaria, MLS shows, with Brad Miller acting for the seller and Pam Miller representing the Flynns.