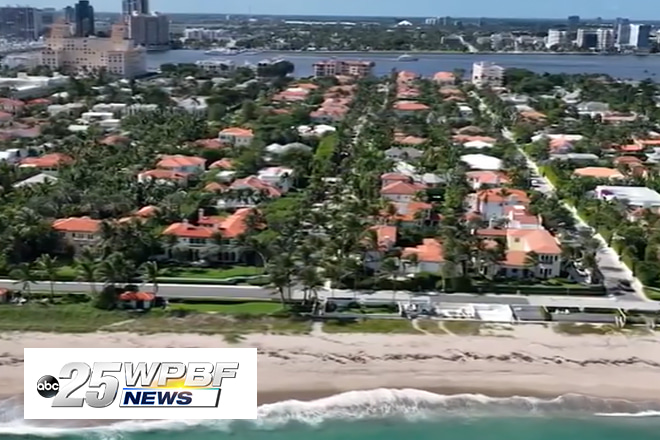 “Are you unarmed? Mr. Meister, are you unarmed?” the lead officer called out as he walked along a hedge towering two stories tall, warning the others, “He might have a gun.”

The officers were cautious because the retired insurance executive had just called in a threat to shoot people on the beach.

Police body camera video shows Meister standing on the steps of his home, greeting the officers with:

“We have to stop this stuff! You’re bad police officers. You’re not supposed to allow this stuff to happen. Nobody’s supposed to be on the beach after 8 o’clock at night!”

This was the latest of over 500 911 calls police say Meister and his wife had made over a period of a year and a half — complaining about people on the beach or the road.

He was not charged with any crime.

This may be the most dramatic moment so far, but it’s just the tip of an ongoing battle for beach access in the town of Palm Beach.

“I just don’t think that’s right. They can’t own the beach. The beach is public,” Justin Mackler said.

When COVID-19 hit in 2020, more people began flocking to the beaches on the island, and residents ramped up complaints, some on town hall meetings held via Zoom.

“We have deteriorating beach conditions due to many more of these day trippers, and many times they are coming with multiple pets, and they do not follow the leash laws because we are out there now, watching,” one woman said.

In response, the town council raised parking rates to $5 an hour, increased no-parking zones and shut down the beaches after dark, so people started going north, using the less regulated public access points across from multi-million-dollar mansions – some of which come with beach ownership above the high tide line.

“I think the public should be able to access the beach. It’s not like anyone owns the public beach access,” said Leah Hill, of West Palm Beach, who was using the public Root Trail access point with her family, as she said they had for years.

But some private owners say they do own the strips of land allowing access to the beaches. And now that fight has moved to court – and it’s Palm Beachers doing the suing.

In 2019, the people who live in the 100 block of Atlantic Avenue hired a lawyer, Guy Rabideau. He concluded the original 1912 deed gave ownership of the beach access to those residents.

They quickly installed a locked gate with a private code, infuriating their surprised neighbors.

Three homeowners are now suing the town of Palm Beach. In a statement to WPBF 25 News, their lawyer said:

“After over 100 years of being used by the public, the Palm Beach Town Counsel, under the cloak of COVID, secretly allowed Atlantic Avenue, a public beach access point, to be stolen,” according to Janssen Law Firm.

Unlike most people in the rest of the world, many Palm Beachers do not like publicity. Of all the people Parker talked to about this story – many with strong opinions – almost no one would go on camera.

“My biggest concern is safety,” said Tiffany Cloutier, the only one from either side of the lawsuit who would speak on the matter. She lives on Atlantic Avenue and is one of the homeowners who now claim that access point.

She says they’re not the bad guys.

“We’ve seen an increase in crime in our neighborhood and in Palm Beach in general,” Cloutier said.

Cloutier says they gave the gate code to everyone who lives on Atlantic Avenue, even outside the owner’s block.

She says it’s usually people from out of town who drink and use drugs illegally, put up tents, sleep on the beach and let dogs romp without cleaning up after them.

“It’s not to lock the public out and beachgoers. It’s really just to keep it safe and clean,” she said.

No one from the town of Palm Beach would comment on this story.

The lawyers for the residents suing the town said in a statement:

“Our clients have filed this lawsuit because they believe that protecting and preserving the public’s access to the Florida beaches should be of paramount importance to all. Unfortunately, the town council is yet again taking an adverse position to protecting the majority of its citizens’ rights to access the beaches in favor of a few entitled individuals.”

They also argue Florida law says when a town maintains private property for four years, it becomes public, and they say that’s what has happened on Atlantic Avenue.

The town has moved to dismiss the lawsuit, saying it has no merit.