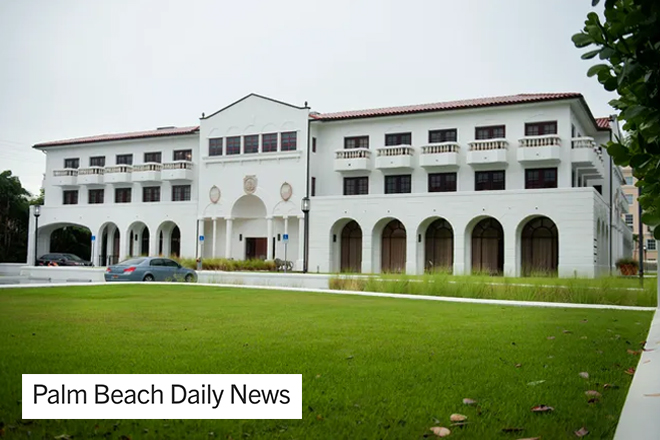 ‘Bankers Row’ office building said to have sold for $37.8 million in Palm Beach

“The building which has just changed hands has about ten tenants, including … lawyers Rabideau-Klein and Hodgson Russ.”

Two real estate investors in a joint venture have bought a renovated Palm Beach office building at 440 Royal Palm Way, their second purchase this year on the street known to locals as Bankers Row. The recorded price will approach $38 million, accorded to multiple sources familiar with the private transaction.

The sale already closed, but a deed for the transaction had not yet been recorded at the Palm Beach County Courthouse as of early Friday morning. The price expected to be documented with the deed — said to be $37.8 million — is in the vicinity of the one recorded in early 2020 when the building plus a six-story office building next door sold for a combined $38.5 million, property records show.

Palm Beach resident Spencer Schlager and Charles Rosenberg of New York City confirmed for the Palm Beach Daily News that they used an ownership entity to buy the Class A building late last week. Anchored by SunTrust Private Wealth, the building is on the south side of the street, the second one east of the Royal Park Bridge.

The acquisition was “a long-term hold for us,” added Rosenberg, who heads Rosemark Management Inc.

In June, Rosenberg and Schlager’s joint venture, CS Ventures, paid a recorded $18.5 million for the U.S. Bank building at 324 Royal Palm Way. That building also was purchased through a limited liability company.

The sellers bought the building at 440 Royal Palm Way in January 2020. They simultaneously purchased the adjacent landmarked office building at 450 Royal Palm Way for a combined $38.5 million. Together, the two buildings were known as Palm Beach Park Centre and were sold by the Propp family of New York and Jupiter.

After the purchase, Griswold’s group made capital improvements and cosmetic changes to both buildings, and last February sold No. 450 for a recorded $17 million to a Delaware-registered entity named after that property’s address.

The building that just changed hands has about a dozen tenants, including the Stifel securities brokerage and investment bank, the private-equity firm Brightstar Capital Partners, the investments firm RedBird Capital Partners, and the Rabideau-Klein and Hodgson Russ law firms. The mix also includes firms known as “family offices,” which manage investment portfolios and assets for individual families.

In a statement released this week to the Palm Beach Daily News, the sellers said improvements to the building had “created a best-in-class property with an impressive tenant roster.”

Built in 1986 around a central atrium, the building was 75 percent leased when the sales contract was signed and is now completely leased, Schlager said. The new owners are in the process of remodeling spaces to accommodate the new tenants.

“We expect to be fully occupied by the New Year,” Schlager said, or shortly thereafter.

Companies controlled by Schlager and Rosenberg own other commercial properties in Palm Beach. Those include three side-by-side mixed-use buildings at 249-254 Royal Poinciana Way along with a landmarked retail-and-office building at 214 Brazilian Ave., which was built in 1925 and for decades housed the Palm Beach Daily News.

The office market in Palm Beach remains a draw for tenants, Schlager said, especially for smaller offices in newly remodeled buildings. Some CEOs who have bought homes in Palm Beach over the past two years are looking to either move their offices to the island or open secondary locations so they can keep tabs on work while in town, he added.

“They want an office here,” said Schlager, who also is an agent at Douglas Elliman Real Estate.

“There’s a lot more demand in Palm Beach for a 3,000 square foot space rather than an 20,000-square-foot space,” Schlager said.

No brokers were involved in the sale, which closed Sept. 17, according to those involved. The buyers have contracted with commercial powerhouse CBRE to handle third-party property management at the building.

The sale included a number of parking spaces in the parking lot and underground garage the building shares with 450 Royal Palm Way.