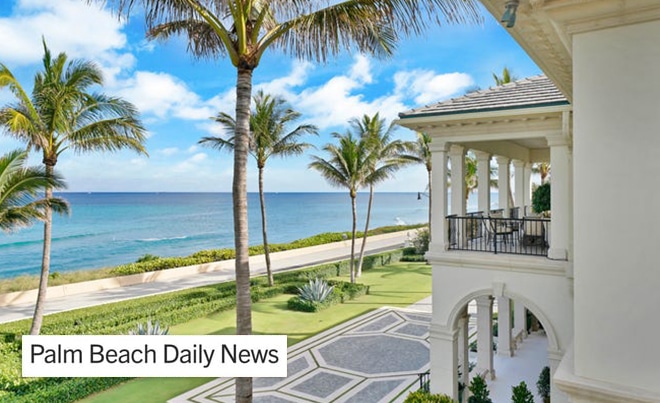 “The prices quoted are those recorded by the county clerk’s office and the list was confirmed via monthly sales reports prepared by Rabideau Klein law firm in Palm Beach.”

If you’re looking for evidence that the summer months in Palm Beach saw red-hot real estate action that sent prices soaring into the upper price brackets, here’s a good number for you: Eleven sales recorded at $35 million or more since May 1, according to the deeds filed at the Palm Beach County Clerk’s office.

Last year during the same period, there were five sales in that price category.

Stepping down the price scale a bit, the town saw 23 sales recorded at $20 million or more since May 1, compared to nine last year. And two of this past summer’s sales in the $20 million-plus club were especially noteworthy.

The first of those deals closed in September at $29.6 million, setting a townhouse sales-price record when the second of four never-lived-in units developed by Frisbie Group changed hands privately at 470 S. Ocean Blvd. on the site of the old Charley’s Crab restaurant. Agent Suzanne Frisbie of the Corcoran Group represented the seller, negotiating opposite Brown Harris Stevens agent Briggs Heyniger, whose client was a trust.

Then early this month, developer Todd Michael Glaser sold, for a recorded $25.845 million, the Palm Beach vacant lot at 360 El Brillo Way that was once home to the infamous mansion of the late disgraced financier and sex offender Jeffrey Epstein. Glaser bought the house at 360 El Brillo Way in March, razed it and cleared the property. Broker Lawrence Moens of Lawrence A. Moens Associates represented both sides in the sale of the lot.

Biggest sales of the summer

Here’s a look at the properties that changed hands for more than $35 million since the end of April. The prices quoted are those recorded by the county clerk’s office and the list was confirmed via monthly sales reports prepared by Rabideau Klein law firm in Palm Beach.

$109.6 million: In June, Dr. Ernst Arnold Langner and his wife, Nataly, sold their custom-built estate at 1840 S. Ocean Blvd. to a trust for $109.6 million. The sale of their estate on Billionaires Row was the second highest-dollar transaction ever recorded on Palm Beach as well as the most expensive sale of an ocean-to-lake estate on the island that was documented as a single transaction. Moens represented both sides.

$95 million: Businessman and Simplex Time Recorder heir Edward “Chris” G. Watkins and his wife, Karen, in May sold their Billionaires Row oceanfront estate at 1341 S. Ocean Blvd. to a trust in an off-market transaction. Moens handled both sides.

$85 million: In July, Palm Beach’s only private island — 10 Tarpon Island just east of Everglades Island in the Estate Section — set a lakefront record when it sold in an off-market deal. Frisbie of the Corcoran Group was the lead agent representing the buyer, an investment group headed by Glaser. Agent Jim McCann of Premier Estate Properties was the lead representative for the sellers, private investor William Toll and his wife, Eileen.

Last week, Moens listed Tarpon Island “as is” at $125 million and, in a separate listing, at $210 million with a major renovation-and-addition project to a 1930s-era house there. The latter was the most expensive listing ever to enter the multiple listing service.

$64 million: A Delaware-registered limited liability company named Beechgreen LLC in August bought a never-lived-in oceanfront estate at 901 N. Ocean Blvd. The house was developed on speculation and sold by real estate developer and property manager Clark Beaty and his businessman father, Keith D. Beaty, who have deep family ties to Palm Beach. The listing agent was Christopher Deitz, then of William Raveis South Florida but today with Compass Florida. Moens handled the buyer’s side.

$49.14 million: Billionaire hedge-fund manager James G. Dinan and his wife, Elizabeth R. Miller, in May bought 520 Island Drive, a never-lived-in California-style contemporary mansion developed on speculation on Everglades Island. Corey Schottenstein of the Schottenstein real estate family developed and sold the property. Frisbie handled the buyer’s side, with Deitz and Moens negotiating on behalf of the seller.

$46.25 million: Fashion designer Tommy Hilfiger and wife Dee Ocleppo Hilfiger in July bought an ocean-to-lake estate at 1930 S. Ocean Blvd. on Billionaires Row. The Hilfigers’ off-market purchase was the third property they had bought on the island since the beginning of March, with their purchases totaling $76.25 million.

The couple bought the Billionaires Row estate from a trust linked to Susan Miller, who had shared it with her late husband, investor and investment adviser Lloyd I. Miller III. Negotiating for the Hilfigers was broker Christian Angle of Christian Angle Real Estate, with Moens acting on behalf of the seller.

$41.71 million: A lakefront compound at 320 Island Road — the street leading to Everglades Island — was flipped in May by an ownership company controlled by Tennessee paycheck-lending entrepreneur W. Allan Jones. He sold the estate for about $15.56 million more than he paid for it in January. The May deal saw Corcoran Group agents Dana Koch and Paulette Koch acting for the buyer, a Delaware-registered limited liability company, with Frisbie representing Jones.

$39.5 million: Venture capitalist David Wetherell and his wife, Elizabeth, in July parted with 757 Island Drive, a vacant lot measuring nine-tenths of an acre on the southwestern tip of Everglades Island. The off-market sale set a Palm Beach price record for the sale of an empty lakefront lot of its size without ocean frontage in Palm Beach. A limited liability company named after the property’s address was the buyer, represented by agent Gary Pohrer of Douglas Elliman Real Estate. The Palm Beach Daily News has been unable to confirm if an agent or broker acted for the sellers.

$35.75 million: In August, an award-winning, contemporary-style residence at 241 Jungle Road — completed in 2016 as a custom home for businessmen and investors Jim Held and Kenn Karakul — sold to a limited liability company, RH Real Estate Organization LLC, with ties to New York City. Angle handled both sides of the off-market sale.

$35.43 million: In June, an oceanfront house that had been home to the late investments executive Sean M. Healey and his widow, Amy Louise Broch, sold at 6 Via Los Incas. A limited liability company, Sunshine Home 5 LLC, was the buyer. Pohrer handled both sides of the sale.