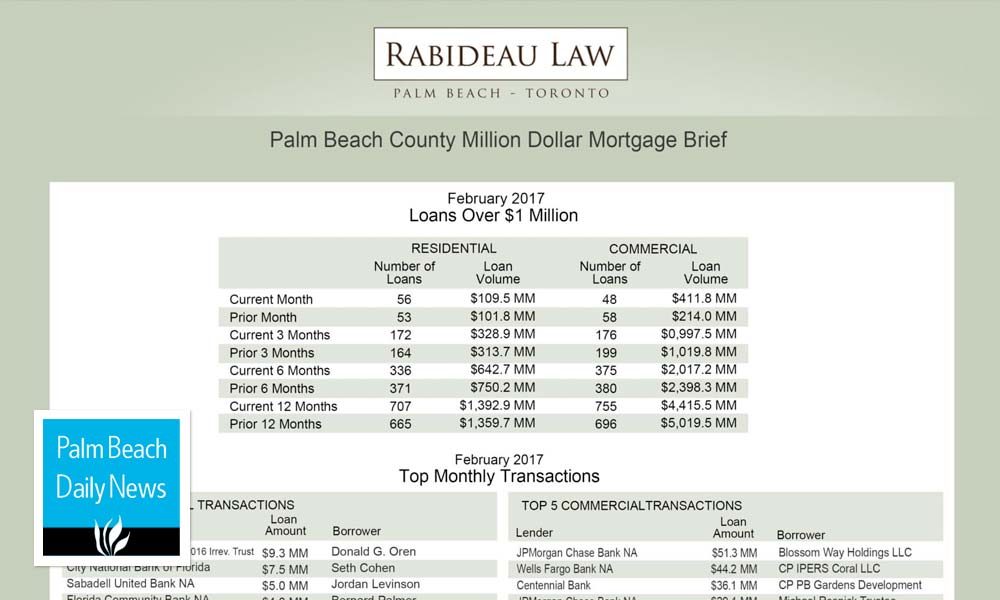 Rabideau Law‘s “Million Dollar Mortgage Brief” is always a good read for those keeping an eye on pricey property in Palm Beach County – and the amount of money said pricey property can generate in loans. Compiled from public records by Palm Beach real estate attorney Guy Rabideau and his team, the monthly report lists the county’s top five commercial and residential mortgages.

Leading the residential section of the March report is a $20 million mortgage tied to the Palm Beach estate owned by private investment firm founder and former Architectural Commissioner Martin Gruss and his wife, Hope for Depression founder Audrey Gruss.

The 30-year mortgage was issued by JP Morgan Chase and related to a loan on the Grusses’ ocean-to-lake Billionaires Row estate at 1574 S. Ocean Blvd. The property was assigned a total market value of $29.34 million in the latest tax rolls. The Grusses also own a property next door valued at another $14.39 million.

Courthouse records show that the Grusses signed another 30-year mortgage — also for $20 million — with Credit Suisse Lending about two years ago. Last week, Credit Suisse filed a notice showing the mortgage had been satisfied following the full payment of the loan.

One other Palm Beach mortgage is on Rabideau Law’s list, ranked fourth in the top five. But it isn’t nearly as sizable as the Grusses’ mortgage – and it isn’t with a bank. Signed in late February, the document shows that Debra and Anson M. Beard Jr. have agreed to sell their home at 421 Peruvian Ave. in Major Alley to Stephanie and Lawrence Flinn Jr. of Hobe Sound. As part of the deal, the Beards issued the buyers a mortgage to secure the Flinns’ repayment of $4 million in escrow deposits that were key to the sale.

As of early this week, no deed had apparently been recorded for the house’s sale.

Meanwhile, on the commercial side of the report is a $14.6 million mortgage filed in conjunction with last month’s $19.5 million sale of the Via Bice off Worth Avenue, which is home to Bice Ristorante among other tenants. The via was sold by Tricony Management.

Amir Morad Amirsaleh signed the mortgage issued by Citibank to Via Bice Worth Avenue LLC. That limited liability company is affiliated with a trust in the name of the Amirsaleh family, which owns an Estate Section house at 165 Kings Road. The family also owns the majority of property in the Via Mizner through a trust.

Read the entire report at Rabideau-Law.com.