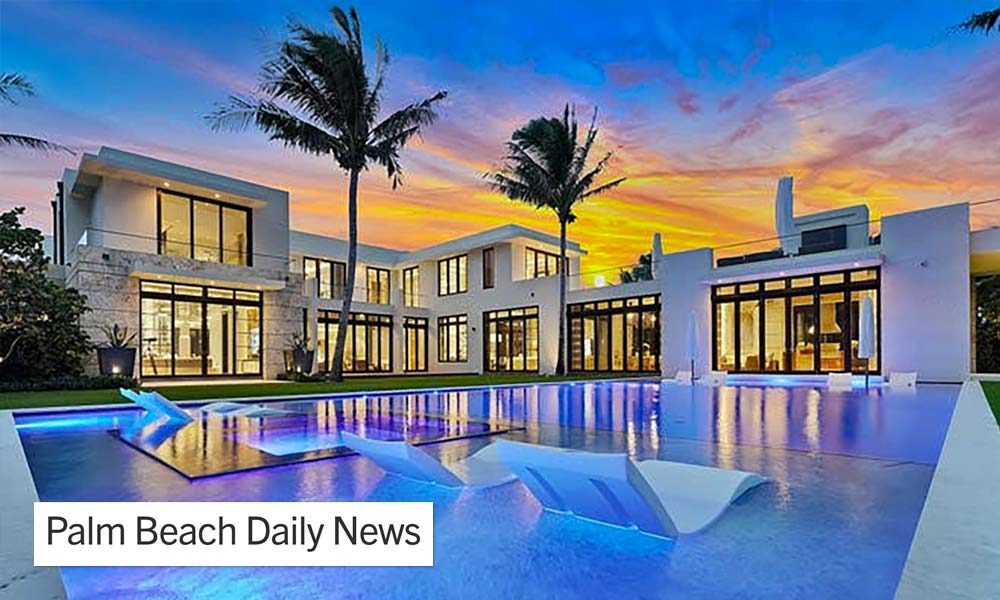 Brokers and agents may be running out of adjectives to precisely describe Palm Beach’s real estate market these days. Words like “active,” “busy” and even “bustling” just don’t seem to catch the spirit of the barreling price escalation and on-steroids sales activity that has even seasoned real estate observers, well, agog.

And that situation is backed up by a new round of sales reports — documenting the first quarter of the year — from real estate agencies that do business on the island.

One number that jumped out immediately? Residential sales volume in town during January, February and March exceeded $1.2 billion — a record, according to the analysis released by the Corcoran Group.

To put that number in perspective, total sales volume in the first quarter of 2020 clocked in at $398 million, the Corcoran Report said.

The spark in sales affected not only single-family properties, townhouses and land but also the long-sluggish condominium market, Hackett noted.

“The substantial increase in activity across all housing types is a sign that people simply want a piece of South Florida to call their own. Interest in the region as a primary home destination continues to accelerate. Buyers are taking advantage of their ability to work from anywhere, and those lured here by the climate are staying because of the attractive cost of living and considerable tax advantages,” Hackett said.

The Corcoran Report examined sales reported in the multiple listing service as well as off-market closings — and there were many of the latter — recorded at the Palm Beach County Courthouse.

Some of the other analyses were limited to MLS data, so apples-to-apples comparisons among the reports are difficult. But general trends hold true across the range of analyses, especially in year-over-year comparisons.

The first quarter of last year ended a couple of weeks after news of the coronavirus pandemic made national news and put a temporary damper on what had been a busy quarter.

Within a couple of months, however, the single-family market had taken off, and the surge continued through the first quarter of this year. Meanwhile, the number of houses and townhouses marketed for sale in the MLS dropped to historic lows, the reports show.

“Price-trend indicators and sales rose sharply (in the first quarter) as listing inventory continued to fall,” New York City based analyst Jonathan Miller wrote in his summary to the report he prepared for Douglas Elliman Real Estate.

The Elliman Report showed 31 single-family properties for sale in the MLS in the quarter that just ended, compared to 153 a year ago.

No wonder that single-family buyers in the first quarter grabbed what they could, as fast as they could, the reports showed. Brown Harris Stevens’ analysis said that in the first three months of last year, single-family properties spent an average of 297 days on the market before they sold. In the same period this year, that average plummeted to 156 days.

In all, the number of single-family sales jumped from 39 in the first quarter of 2020 to 69 during the same period this year, Corcoran’s analysis showed. And closed sale prices were up an average of 84 percent, year over year.

But the Corcoran Report tempered the latter finding: Even though the average single-family price rose to $13.8 million, seven sales closed at more than $40 million each, skewing the averages a bit. Among those was the record-setting sale, recorded at about $122.7 million, of a new oceanfront house on 2 acres at 535 N. County Road.

The latest sales report from Rabideau Klein, a Palm Beach law firm specializing in real estate, adds another perspective to the sales picture. Of the 10 biggest-dollar sales over the 12-month period that ended March 31, five occurred during the first quarter of this year. The top 10 all recorded at more than $46 million, the Rabideau Klein report shows.

The report released by Sotheby’s International Realty also addressed sale prices, noting that January, February and March saw a 40% vault in the median transaction price compared to the same period last year — from $5.1 million to $7.2 million. The median is the price at which half the properties sold for more and half for less.

A report from Linda R. Olsson Inc. examined the fairly narrow gap between asking prices and sale prices during the first quarter, further documenting that many buyers were willing to pay premium prices. Of the single-family properties that sold for more than $30 million, for example, the difference between asking and sale prices ranged between 78% and 98%.

On the Condo Scene

If single-family sales in town have been on fire since last May, much of 2020 was marked by a comparative lag in condominium and cooperative unit sales. More than one broker blamed the sleepy performance on buyers’ reluctance to move into higher-density buildings during the initial months of the pandemic.

But the new reports show that the multi-family segment finally began catching up in the first quarter as the single-family market tightened.

Sotheby’s International Realty’s report reinforced the idea that buyers searching for better-quality condominiums may soon face a market almost as limited as those looking for single-family properties.

The number of in-town condo sales — facing Midtown Beach and on the near North End — soared 52 percent, with dollar volume up 101%, the Sotheby’s report said.

On the South End’s Condominium Row, the increases were even more dramatic, wrote Sotheby’s Brokerage Manager Debra Reece. The number of transactions rose 133%, generating a 171% leap in dollar volume — from $30.8 million in the first quarter of 2020 to $83.6 million in the quarter just ended.

The report from Tina Fanjul Associates sounded a note of optimism about where the town’s overall real estate market might be headed after such a robust first quarter.

The current year, the Fanjul report said, “is shaping up to be another record-setting year. Increases across the board in both the residential and condo markets have created a flurry of market activity. Off-market sales are rising and inventory is being snapped up as soon as it hits the market.”