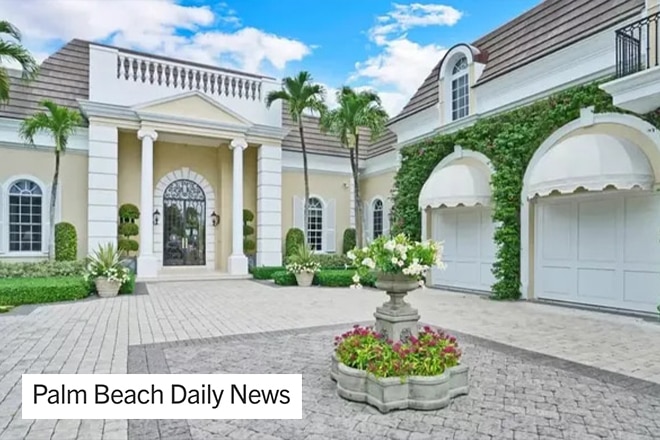 The 1990s-era house at 1494 N. Lake Way was sold by businessman Malcolm W. Hall and his wife, Lorrain Sommerville-Hall.

An estate on a lakeside lot in the far North End of Palm Beach has sold for a recorded $32.525 million, the price recorded with the deed.

The sellers — real estate and radio businessman Malcolm W. Hall and his wife, Lorrain Felicita Sommerville-Hall — owned the property at 1494 N. Lake Way as trustees of a trust in their names, the courthouse records show. The house last changed hands for a recorded $9 million in 2006.

A Florida limited liability company, II 1494 LLC, bought the property, according to the deed posted late Thursday afternoon on the Palm Beach County Clerk’s website. That company is managed by Palm Beach real estate attorney Guy Rabideau, who declined to comment on the transaction.

The estate is the fourth lakeside house in Palm Beach to change hands for more than $30 million this month.

With a Regency-style house built in 1998, the property on North Lake Way measures around three-quarters of an acre and faces about 104 feet of lakefront with a dock. The estate lies near Mediterranean Road, just at the point where the land begins to bulge to the northwest near the inlet.

The house has five bedrooms and 9,763 square feet of living space, inside and out, property records show. There’s also a one-bedroom apartment for household staff, according to the sales listing.

French doors in many of the rooms look out across the west lawn to the Intracoastal Waterway. The house has an expansive loggia the sellers had set up with lounge chairs and an outdoor dining table.

Broker Lawrence Moens of Lawrence A. Moens Associates handled both sides of the sale, which closed Thursday, according to records in the multiple listing service. Moens listed the house in mid-November at $42 million and dropped the price to $38.5 million in late January, the MLS shows.

The sales listing described the estate as “a rare new opportunity to live Palm Beach properly.”

Moens and the Halls could not be reached for comment.

Malcolm Hall was born in England and built his fortune through a variety of businesses there, including ventures in the steel industry, real estate and radio stations, according to published reports. In addition to Palm Beach, he has had homes in London and New York, property records show.

The couple had the Palm Beach house homesteaded as their primary residence in the latest tax rolls.

The buyer in 2006 was a limited liability company named after the property’s address. In 2008, Lorrain Sommerville-Hall, who was born in Jamaica, became manager of that company, courthouse and business records show. The couple later transferred ownership to their trust.

Property records show Malcolm Hall has bought and sold real estate in Palm Beach, sometimes with his wife, including condominiums at the Palm Beach Biltmore and a property on Ibis Isle.