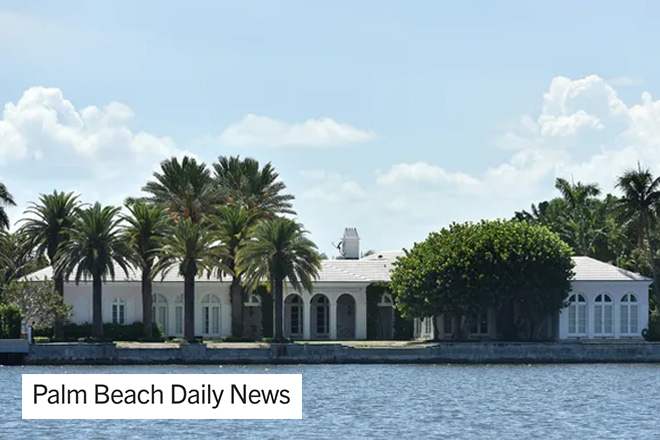 Private-equity specialist Jeffrey C. Walker was on the seller’s side of the off-market sale at 662 Island Drive, which last changed hands for $19 million in 2015. A trust was on the buyer’s side.

Sold seven years ago for $19 million, a lakeside house on Everglades Island in Palm Beach has changed hands off-market for $46 million, according to courthouse records.

The house at 662 Island Drive is the second most-expensive home ever sold on Everglades Island, property records show.

Private-equity specialist Jeffrey C. Walker and his wife, Suzanne, sold the five-bedroom house, which was built in 1996.

On the buyer’s side was the 662 Island Trust, for which Palm Beach attorney David E. Klein serves as trustee. The deed links the trust to a Palm Beach house at 101 Gulfstream Road, which was sold for a recorded $23.85 million in May by a trust linked to Mark T. Massey and his wife, Elizabeth, of South Hamilton, Massachusetts. The buyer in the deal on Gulfstream Road was a Delaware company, 101 Waters Edge LLC, with a Chicago mailing address.

Jeffrey Walker co-founded and served as CEO of CCMP Capital, the successor to JPMorgan Partners, until he retired in 2007. Property records show the Walkers have downsized to a house they bought in May for a recorded $7.1 million in Palm Beach Gardens.

The Walkers had the Everglades Island house homesteaded as their primary residence in the latest tax rolls.

The house has five bedrooms and 9,618 square feet of living space, inside and out, property records show.

The property has 175 feet of water frontage on the east side of Everglades Island. On a lot of about sixth-tenths of an acre, the house is the seventh one south of the Island Road bridge that connects Everglades Island to the rest of Palm Beach.

In the sale recorded June 15, agent Suzanne Frisbie of the Corcoran Group negotiated for the seller opposite broker Christian Angle of Christian Angle Real Estate, who handled the buyer’s side. Both confirmed their involvement but declined to comment further.

Frisbie and Angle were both involved in the off-market sale in July 2015 when Jeffrey Walker bought the house from former Palm Beach Town Councilman Denis Coleman and his wife, Annabelle. The Colemans had built it as a custom home in 1996.

Angle represented the Colemans in the 2015 deal, with Frisbie acting on behalf of Walker.

When the house sold seven years ago, Frisbie said the property offered remarkable views across the Lake Worth Lagoon to Tarpon Island and homes on El Brillo Way and other streets in the Estate Section.

“The view corridors all the way back to El Brillo are really lovely. They’re just striking,” she told the Palm Beach Daily News at the time.

With its east-side living room, the house was designed to take full advantage of its site, Frisbie added.

“It really does focus on the views. The procession through the house gives every room a beautiful sight line,” she said in 2015.

In the May sale of the five-bedroom house on Gulfstream Road, Angle had the listing for the Masseys. Online sources show a Mark Massey co-founded AltaRock Partners LLC, a Massachusetts-based hedge fund.

The Masseys’ ChubbyChooChoo Trust bought the Gulfstream Road house — with 9,069 total square feet — new for $13.53 million in 2020 from its developer, Frisbie Group, where Suzanne Frisbie is a principal.

Agents Pat McInerney and Sylvia James of Brown Harris Stevens handled the buyer’s end of the Gulfstream Road deal, according to records in the multiple listing service.

The most expensive sale on Everglades Island was recorded at $49.14 million in May 2021. In that deal, billionaire hedge-fund manager James G. Dinan and his wife, Elizabeth R. Miller, bought a never-lived-in California-style contemporary mansion. In that off-market sale, developer Corey Schottenstein of the Schottenstein real estate family sold the property. Frisbie handled the buyer’s side, with agent Christopher Deitz — then of William Raveis South Florida but today at Compass Florida — and broker Lawrence Moens of Lawrence A. Moens Associates negotiating on behalf of the developer.