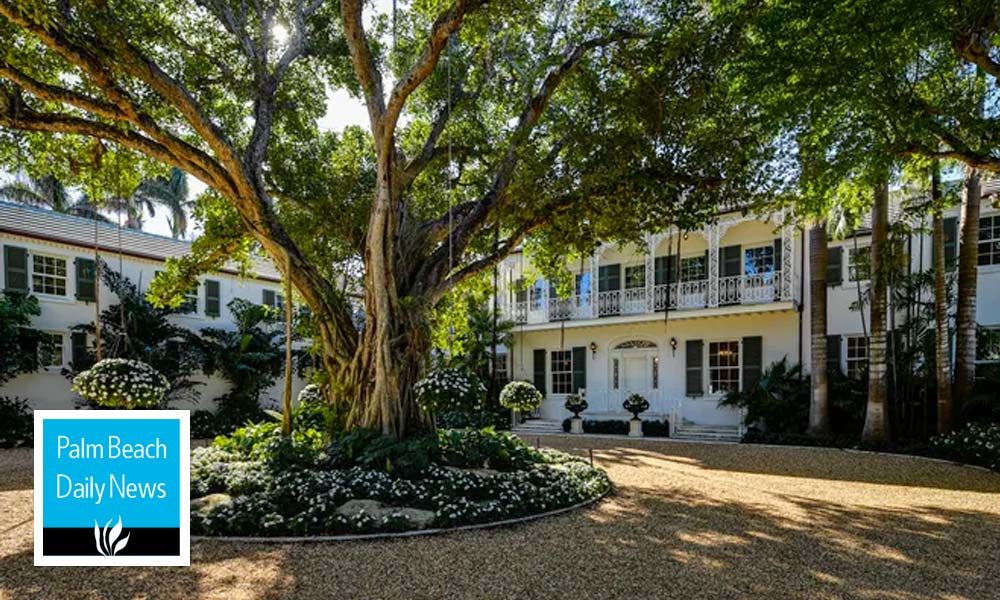 Beatrice Tollman, who founded the British parent company of The Chesterfield hotel in Palm Beach, has sold her longtime lakeside estate on nearly 3 acres in the Estate Section for a recorded $57 million.

The sale of 174 Via Del Lago is the eighth Palm Beach sale of houses or vacant lots to hit or exceed $40 million since the tail end of December, records show. It also is the second-highest-dollar deal ever recorded on the island for a lakefront estate without ocean frontage.

The deed lists the buyer as a limited liability company named 174 VDL Investment LLC, which is linked in business records to Siren Property Development and Investment LLC. Both entities are registered in Florida and managed by West Palm Beach real estate attorney Maura Ziska, records show. No other information about the two companies was immediately available Monday.

The estate, with its recently renovated house, hadn’t changed hands since 1987, when Tollman paid $2.7 million for it, property records show.

With about 307 feet of waterfront, the estate is five streets north of former President Donald Trump’s Mar-a-Lago Club. The property is home to Southwood, a landmarked 1934 Monterey-style mansion — with French Creole influences — designed by noted society architect Marion Sims Wyeth.

The mansion has 18,554 square feet of living space inside and out, with nine bedrooms, the listing shows. Among the features are a four-bedroom staff apartment, a six-car garage and a dock.

Broker Christian Angle of Christian Angle Real Estate listed the estate for sale at $64.9 million in mid-December in the Palm Beach Board of Realtors Multiple Listing Service.

Agent Suzanne Frisbie of Premier Estate Properties acted on behalf of the buyer, according to the MLS.

The transaction closed Friday, according to an updated sales listing in the MLS.

The most recent renovation of the house was carried out by Smith Kellogg Architecture of West Palm Beach and won the Addison Mizner Award for historic preservation, renovation and restoration in the 2021 juried competition sponsored by the Florida chapter of the Institute of Classical Architecture & Art.

The grounds include a coral keystone-covered patio and pool patio offering “stunning sunset views” of the Intracoastal Waterway, according to Angle’s sales listing. The tennis court features a “viewer’s terrace.” Elsewhere, a garden bridge crosses over a koi pond. There’s also an outdoor kitchen.

The interiors are appointed with “gorgeous European detailing,” the listing said, including the paneled library. A generously proportioned foyer is open to a gallery overlooking a courtyard, and the formal dining room — with a fireplace — leads to the “luncheon loggia.”

The gym has a built-in bar and spa with a changing room, steam shower and sauna. The wood-paneled theater features a drop-down movie screen, integrated speakers and a bar.

Beatrice Tollman is president of the London-based Red Carnation Hotels, which also owns hotels abroad. In 1989, the Tollman family acquired the former Palm Court hotel near Worth Avenue at 363 Cocoanut Row and reopened it as The Chesterfield. Tollman’s husband is hotel and travel executive Stanley Tollman, but she owned the house in her name.

The Red Carnation Hotel Collection includes 19 properties, including six in London — the Egerton House Hotel, The Chesterfield Mayfair, The Montague on the Gardens, Hotel 41, The Rubens at the Palace and The Miletone Hotel & Residences. Among the other properties are hotels and resorts in Ireland, Scotland and Switzerland. Three properties in South Africa include The Twelve Apostles Hotel & Spa in Cape Town.

In 1990, the town granted landmark status to Southwood, a designation that protects its exterior walls from significant alterations without the permission of the Landmarks Preservation Commission.

Tollman bought the property from the estate of the late Joanne Uris, courthouse records show.

In the category of lakefront estate without ocean frontage, the amount recorded for the sale the former Tollman estate trails only a sale that closed last June when a renovated landmarked estate at 8 S. Lake Trail sold for $71.85 million in an off-market transaction. In that deal, Robb E. and Lydia Turner sold the estate to an entity linked to discount brokerage billionaire Charles Schwab. The Palm Beach Daily News was unable to confirm if any real estate agents were involved in that deal.

The third-biggest sale in that category was recorded in December, when the lakeside estate of the late Katherine DuRoss Ford sold for a recorded $55.15 million at 300 N. Lake Way. Broker Lawrence Moens of Lawrence A. Moens Associates had the listing for the former Ford house. Angle represented the buyers, David and Constance Littman.