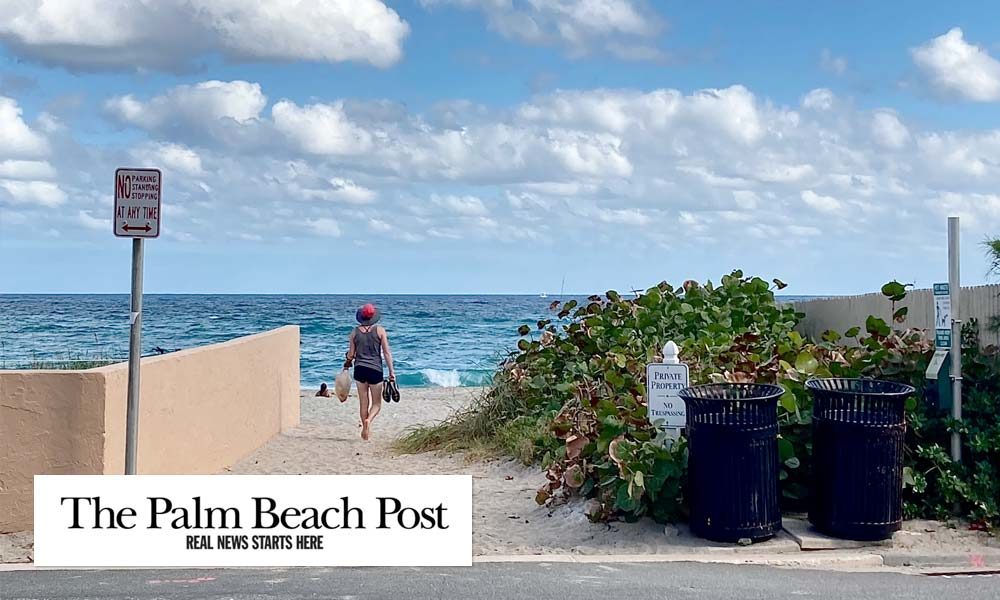 A sandy beach passage with a puzzling legacy will remain open to the public for now following a Palm Beach Town Council decision to temporarily forbid the installation of a 6-foot-tall locked gate along the disputed path.

Council members voted 4-1 Tuesday to reject a permit request filed early last year by entities claiming to own the 20-foot wide Root Trail access, which is north of The Breakers and has been used for decades by islanders and non-islanders alike to reach the beach.

Town attorney Skip Randolph recommended the move and argued the town could keep the entrance public permanently by pursuing a prescriptive easement – a legal maneuver that requires the town prove several points, including at least 20 years of conspicuous use by the public with the knowledge of the owners.

The locked gate was requested after people complained about an increase in unmannerly beachgoers using the entrance, trespassing on private property, drinking alcohol on the beach, littering and loitering near homes.

Bill McHenry, who lives on Root Trail – a narrow, lightly-used street where parking is by permit only – said the trouble started three years ago when the beach was listed on Yelp as dog-friendly and “unrestricted.”

But complaints escalated during the summer as people sought an escape from COVID-19 restrictions on other activities.

While there are three undisputed public access points to the stretch of beach near Root Trail, the area is not technically a municipal beach. There are no lifeguards or facilities. Dogs are allowed only if they are on a leash.

“The (online) social posting significantly changed the traffic on Root Trail and also caused the number of people abusing the beach to increase, especially on the weekends,” McHenry said.

The Root Trail entrance is attractive because it’s close to public parking, which until the fall was free for two hours. Most of those spots are now $5 an hour.

The true ownership of the path at the end of the eclectic street of historic shotgun-style cottages – two of which are owned by “Margaritaville” singer Jimmy Buffet – is in question.

While officials maintain the entrance was deeded to the town in 1912, a 1995 tax deed sale purports to make a private entity —Root Trail Partners, LLC — the owner of the north 10 feet of the trail. The owner of the south 10 feet is listed by the Palm Beach County Property Appraiser’s Office as Ocean Towers condominium.

Randolph said the town is still looking into the tax deed sale.

“The town is not required to pay taxes on it, so there never should have been a valid tax sale,” said Timothy Hanlon, an attorney representing nearby homeowners who could lose access if the entrance is locked.

In previous meetings about the Root Trail entrance, most discussion focused on the north 10 feet, but Randolph said Tuesday he considers the entire 20-foot opening fodder for a prescriptive easement.

Ocean Towers condominium board member Helen Starr said Tuesday’s meeting was the first time she had heard the condo’s portion of the entrance questioned.

“We always assumed everyone was our neighbor and it was fine going through there,” Starr said. “It’s only in the past couple of years that the demographics have changed the situation.”

Starr’s concern that the condo had not been alerted that its half was being challenged triggered Councilwoman Julie Araskog to vote against the motion to temporarily deny the fence permit. She also said she wanted to read previous legal cases that dealt with prescriptive easement.

Who can use Root Trail will likely come down to how a court defines the legal remedy.

Root Trail Partners attorney Guy Rabideau said the town can’t meet one of the necessary elements – that the use of the entrance was “adverse” to the owners, or, basically, done without their permission.

“We try to be good neighbors, we are good neighbors, and now you are potentially talking about taking a legal right-of-way away from my client,” Rabideau said during Tuesday’s meeting, which was held via Zoom online. “I do have a court reporter on here. If we have to sue over it, we will.”

Rabideau said in a meeting last fall that the purported owners of the Root Trail entrance could work out an agreement with nearby property owners that would allow them to use the gate.

But that may leave out people on streets other than Root Trail, such as Daphne Flach, who lives two blocks south on Sunrise Avenue.

“We’d just like to be able to walk to Root Trail,” Flach said. “I really don’t agree that it has been taken over by people who are not our neighbors.”