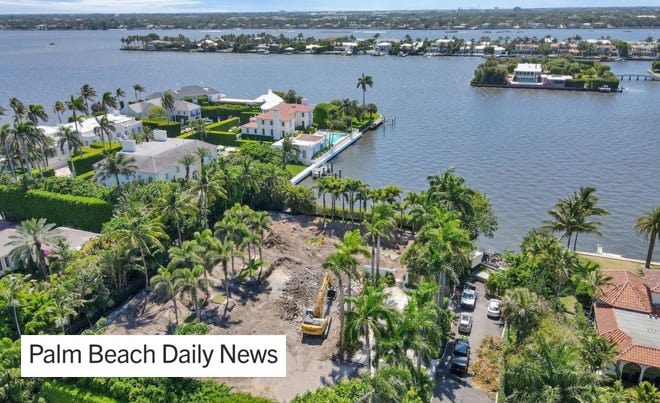 “The trust’s mailing address is listed in care of the Rabideau Klein law firm in Palm Beach.”

A Palm Beach vacant lot that was once home to the infamous mansion of the late disgraced financier and sex offender Jeffrey Epstein has sold for $25.845 million, the price recorded with the deed.

Seasonal Palm Beach residents David and Mally Skok are linked to the trust that was on the buyer’s side of the property at 360 El Brillo Way, the Palm Beach Daily News has confirmed.

David Skok is a venture capitalist and a partner with Matrix Partners in Boston. His wife is a Boston-based interior decorator and designer of wallpapers and fabrics.

The Skoks, who have a vacation home on the North End, could not be reached for comment. Their plans for the property that just changed hands are unclear.

The Wall Street Journal first reported that David Skok was on the buyer’s end of the deal.

The lakeside lot had been in the MLS since late April with a price of just under $30 million. The property measures about an acre with 170 feet of frontage on the Intracoastal Waterway, about 2 miles north of former President Donald Trump’s Mar-a-Lago Club.

The seller was 360 El Brillo LLC, a limited liability company associated with developer Todd Michael Glaser, property records show. In March Glaser’s company paid a recorded $18.5 million for the former Epstein house, and Glaser said he would develop a house there on speculation.

Glaser previously told the Daily News it was personally satisfying to knock down the house. “Finally,” was his comment when he demolished the house in April.

Glaser had a new house designed for the property. But in July the design was killed by the Palm Beach Architectural Commission, which said its modern architecture would have been out of character with the other homes on the street.

Federal prosecutors said Epstein sexually assaulted underage girls and young women in the Palm Beach house and other locations in a multi-year scheme. Epstein killed himself, authorities ruled, in August 2019 while in federal custody in a New York City jail cell after he was charged with conspiracy and sex trafficking. In 2008, Epstein had received a controversial 18-month sentence after pleading guilty to lesser state charges in Palm Beach County.

Glaser could not be reached immediately Thursday for comment.

Broker Lawrence Moens of Lawrence A. Moens Associates held the $29.95-million listing for the property. Moens couldn’t be reached.

But when the house was knocked down, Moens broke his customary public rule about not commenting publicly on transactions in which he was involved. “I only got involved in the sale of Jeffrey Epstein’s residence to ensure it would be wiped off the map of Palm Beach,” Moens told the Palm Beach Daily News.

On Tuesday, the sales listing was marked “pending” in the MLS, meaning that it was under contract with a non-refundable deposit. The sale closed Thursday, the MLS shows.

The deed shows the lot was bought through a trust named after the property’s address. The trust’s mailing address is listed in care of the Rabideau Klein Law Firm in Palm Beach. Trustee David Klein could not be reached.

The lot is at the end of a quiet dead-end street in the Estate Section. It looks out to a cove on the Intracoastal Waterway toward Tarpon Island and Everglades Island, smaller islands just west of the barrier island that comprises Palm Beach.

Epstein’s six-bedroom, West Indies-style house and outbuildings had a total of 14,223 square feet, property records show. When he purchased the house last spring, Glaser was represented by Moens opposite listing agent Kerry Warwick of the Corcoran Group. The property was sold by Epstein’s estate.