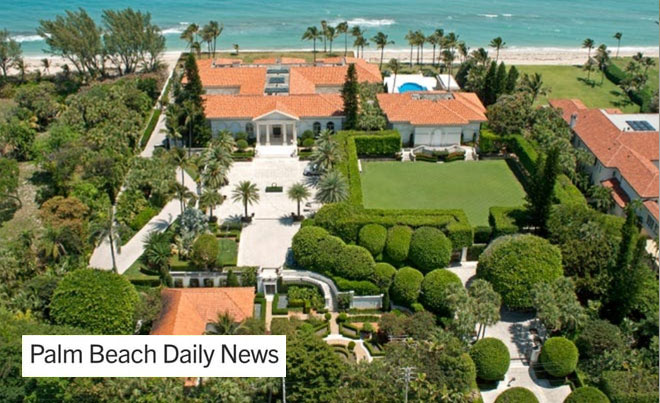 “as pointed out in a new report on property sales, development and land use released by Rabideau Klein, a Palm Beach law firm specializing in real estate”

Radio shock jock and celebrity Howard Stern is at it again, carrying out more improvements to the Palm Beach seaside manse he bought for $52 million in 2013.

His latest project appears to be a renovation and addition project valued at nearly $2 million, Town Hall records show.

The work includes a partial interior renovation and the addition of an exterior staircase on the street side of the two-story house built in 1992 at 601 N. County Road, according to the plans and property records.

Former ‘America’s Got Talent’ judge had other million-dollar renovations

Stern has been down this road before. After he bought the mansion, he reportedly carried out renovations valued at $10 million that included a 1,000-square-foot closet for his animal-activist wife, Beth Ostrosky Stern — a project that sparked plenty of comment on fan pages and in the tabloid press.

Although they are officially New York residents, the couple have spent plenty of time at their Palm Beach estate.

On 3.3 acres, the couple’s five-bedroom Mediterranean-style estate includes the main house and a one-story guesthouse/garage building with 39,094 square feet of living space, inside and out, property records show. Of that total, 18,673 square feet is air-conditioned.

The manicured grounds include a croquet lawn, a large motor court, arbors and an oceanfront swimming pool with a cabana. A patio area runs the length of the house on the east side facing about 300 feet of shoreline.

Stern and his wife’s renovation projects at the manse have required more than 30 building permits, town records show.

The permit for the latest project was issued in September, as pointed out in a new report on property sales, development and land use released by Rabideau Klein, a Palm Beach law firm specializing in real estate. The value of the project is listed at $1.999 million in town records.

Bryan Brown Architects in Pound Ridge, New York, was involved in the design of the new project. Taconic Builders Inc. of West Palm Beach and Mamaroneck, New York, is the builder.

Stern hosts The Howard Stern Show on SiriusXM Radio network, where he has a multi-year contract estimated at $100 million a year or even more. He also was a judge on the television show America’s Got Talent.

Real estate broker Lawrence A. Moens of Lawrence A. Moens Associates handled both sides of the 2013 deal when Stern, using a trust, bought the Palm Beach estate. Ownership was later transferred to a limited liability company.

Stern’s Palm Beach neighbors include his good friend, rocker Jon Bon Jovi, who lives down the street in an oceanfront mansion he and his wife, Dorothea Hurley, bought for a recorded $43 million last year using an ownership company.

Stern and his wife have at least two other homes. In New York, they reportedly reside in a two-floor apartment in Manhattan’s Millennium Tower in New York City. They also have a custom waterfront estate in the Hamptons on Long Island.