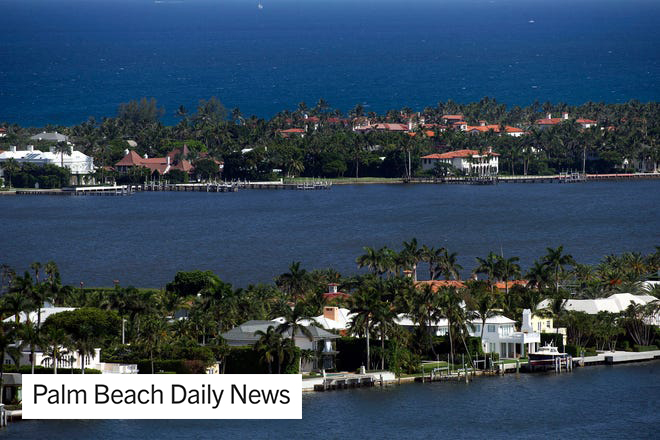 Palm Beach real estate marked a banner year in 2021 — and that banner might as well have been sewn from the most expensive fabric available.

Residential sales in Palm Beach last year for the first time broke the $4 billion mark and more than doubled the dollar tally for 2020, which had set its own town record at $2.4 billion.

Such is the word from the fourth-quarter sales prepared by agent Suzanne Frisbie and her Frisbie Palm Beach team at the Corcoran Group.

Frisbie’s overall finding — that 2021 was a year like no other in Palm Beach real estate — was backed up by several other end-of-year sales reports, including a separate analysis from Corcoran itself. The analyses were released this week by real estate agencies that do business in Palm Beach.

The reports not only examined sales in October, November and December but some also recapped sales of houses, land, condominiums and co-operative units throughout 2021.

The sales boom last year was an extension of the real estate boom that began after the coronavirus pandemic hit the nation in early 2020, the reports showed.

Buyers have descended on Palm Beach with a desire for homes offering expansive spaces for outdoor living, even as executives and entrepreneurs have seen they can work remotely from almost anywhere, said Jonathan Miller, head of New York City-based Miller Samuel Inc., which prepares the Elliman Report.

And those buyers — whose personal wealth has soared since the pandemic began, buoyed by Wall Street’s bullish performance and relatively low interest rates — have ripped through the available housing inventory, Miller added.

“What we’ve seen in markets across Florida and in Palm Beach in particular has been the evaporation of supply at an unprecedented level,” Miller said.

‘Buyers will pay any price’

The fourth-quarter sales reports used different criteria to measure sales, so making apples-to-apples comparisons is difficult. To arrive at its $4.07 billion sales figure, Frisbie’s report, for example, looked at deals closed in the multiple listing service along with the plentiful off-market deals recorded at the Palm Beach County Courthouse. Other reports examine only MLS figures.

But the general takeaway from all the analyses was the same. Sharply escalating asking prices — driven by a deeply entrenched sellers’ market that had buyers frequently engaging in bidding wars for scarce properties — have sent sales prices skyrocketing.

“If there’s anything to be gleaned from 2021’s record-setting market, it’s that buyers will pay any price for a piece of Palm Beach, where the only thing more desirable than the weather are the tax advantages,” said Hackett, whose regional duties at Corcoran include supervising the Palm Beach office.

“Quarter after quarter, the 2021 market remained scorching hot, with average prices for single-family homes and condos skyrocketing over 80%. Luxury home sales dominated the market, with sales over $10 (million) increasing 15% annually.”

“Most luxury condominium, home and land prices have doubled since 2020,” said Olsson, adding that the constraints of the market have forced buyers “to dig deep to relocate to Palm Beach and the surrounding areas.”

Frisbie’s report included a figure that helps put the impact of those blockbuster price increases in perspective: The total number of single-family transactions last year — 300 — rose by just 4%, year over year. In other words, with only a modest increase of 11 sales, total transactions in 2021 generated $1.6 billion more than sales in the previous year.

The latest report from Rabideau Klein, a Palm Beach law firm that specializes in real estate, also shed light on rising prices. During 2021, the median sales price of single-family houses and land jumped 44% over 2020 levels, landing at under $8 million, according to the Rabideau Klein report, which only analyzes sales recorded at $1 million or more.

In the fourth quarter alone, the median sales price of single-family houses and land — $8.47 million — vaulted 57% compared to the same period a year ago, the Rabideau Klen report showed. The median is the price at which half of the properties sold for more and half for less.

Median prices are always skewed by outlier sales at the top of the market — and last year there were plenty of those. In all, 18 house and land deals in 2021 hit prices recorded at the Palm Beach County courthouse at $39 million or more, compared to just six transactions in 2020, according to figures from the monthly sales reports released by Rabideau Klein.

• a new beachfront house developed on speculation at 535 N. County Road and sold for a recorded $122.7 million to a company affiliated with private-equity billionaire Mark Schleifer;

• a custom ocean-to-lake estate at 1840 S. Ocean Blvd. sold for a recorded $109.6 million to a trust reportedly linked to hedge-fund billionaire John Paulson; and

And of the 10 highest-dollar Palm Beach sales of 2021, only one closed during the fourth quarter: In December, a limited liability company bought a never-lived-in oceanfront house developed on speculation at 916 S. Ocean Blvd. for a recorded $57 million.

The top three sales were all waterfront properties, which proved especially hot commodities last year. A fourth-quarter sales report parsing MLS data from Tina Fanjul Associates noted that 2021 saw a 26% increase over 2020 in the number of waterfront properties sold north of Sloans Curve. In 2021, the dollar volume generated by those waterfront sales nearly doubled, year over year, to $1.1 billion, the Tina Fanjul Associates report said.

On the condominium scene

But the rush of multifamily sales left a markedly diminished inventory of apartments on the market toward the end of the year.

Inventory in the fourth quarter dropped, year over year, by “67% in town and 56% in the South End, and sales were achieved much more quickly, with the average number of days on the market approximately cut in half,” Palm Beach Brokerage Manager Debra Reece wrote in the introduction to Sotheby’s International Realty’s report.

And fourth-quarter sales of “in-town” condos and co-ops dropped 56% in a year-over-year comparison, with an average selling price of $3.4 million, according to the Sotheby’s report.

The report from Brown Harris Stevens noted the average multifamily sales price during the fourth quarter rose, in a year-over-year comparison, by 9% to $1.53 million. The average price buyers paid per square foot also jumped – by 13%, to $780 per square foot.

Looking ahead, agent Crista Ryan, president of Tina Fanjul Associates, said in her agency’s report that she expects a robust year of sales, even if the island’s housing inventory remains tight.

“Sales will continue to be strong, as long as interest rates don’t increase above 5%,” Ryan said.