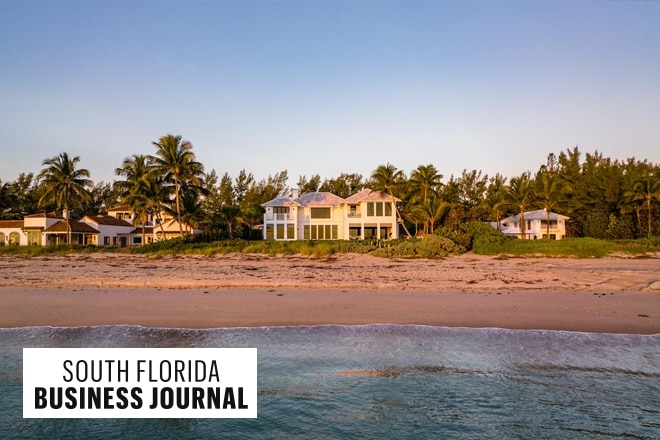 The 2929 Ocean Trust, with local attorney Guy Rabideau as trustee, sold the 7,282-square-foot home at 2929 N. Ocean Blvd. to a trust in the name of David J. Miller, who listed an address in Miami Beach. Miller is a senior portfolio manager at Elliott Management and a director of Pittsburgh-based Howmet Aerospace (NYSE: HWM). JPMorgan Chase Bank awarded a $17.35 million mortgage to the buyer.

Candace and Phil Friis of the Corcoran Group brokered both sides of the deal. They declined to comment. The price equated to $3,665 a square foot.

The mansion last sold brand new for $15.9 million in June 2021, so it was flipped for a 68% gain in nine months. That’s a reflection of the strong demand for oceanfront homes in Palm Beach County as more wealthy people move here.

The home is on a 0.99-acre lot with 121 feet of ocean frontage. It features six bedrooms, six bathrooms, two half-bathrooms, three terraces, a wine rack, a loggia and a pool/spa.

The 2929 Ocean Trust was also used in July 2021 to purchase a co-op in the Somerset of Gulfstream condo for $1.8 million. The assignment of co-op lease document stated that the residents will be Jesse Aron and Karen Sue Cohn.

Jesse Aron Cohn is an equity partner and managing partner at West Palm Beach-based Elliott Management, where he has been since 2004. He was previously on the board of San Francisco social media giant Twitter.

As for the buyer, Miller has been with Elliott Management since 2003. A trust in his name bought the home at 7939 Biscayne Point Circle, Miami Beach for $5.05 million in 2020. He changed his domicile from New York to Miami beach in June 2021, according to Miami-Dade County records.

Elliott Management announced in 2020 that it would move its headquarters from New York to West Palm Beach. That means many of its key employees are buying homes in South Florida.