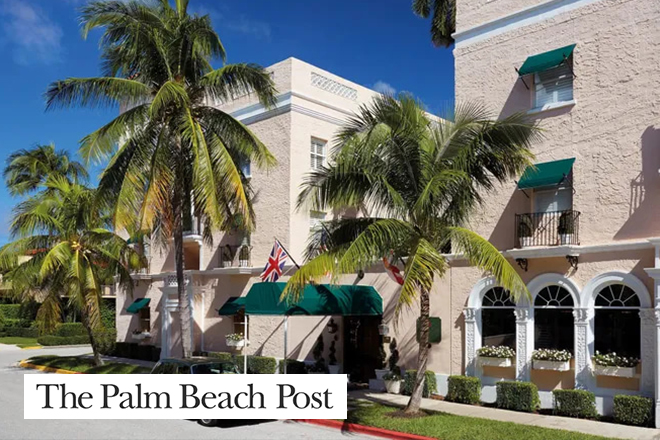 The Chesterfield, the landmarked boutique hotel with a British accent in Palm Beach, has changed hands for $42 million, the price recorded Thursday with the deed.

British billionaire brothers David and Simon Reuben control Reuben Brothers, the London-based company that bought the hotel through a limited liability company. Reuben Brothers is a private-equity and real-estate investment and development firm.

Reuben Brothers “expects to carefully reposition” The Chesterfield Palm Beach into its global portfolio of diversified investments, according to a statement on the Reuben Brothers website.

“Our real estate holdings are significant in scale and broadly diversified, encompassing office, retail, hotel, residential and infrastructure properties across the world,” the website says. A spokesperson for Reuben Brothers could not be reached immediately for comment.

The hotel had been owned since the tail end of the 1980s by a company affiliated with Tollman-Hanley Hotel Group and businesswoman Beatrice Tollman. She is president of London-based The Red Carnation Hotel Collection, which owns and operates hotels and resort properties abroad.

Her late husband was hotel and travel executive Stanley Tollman, who founded and served as chairman of the Tollman family company The Travel Corporation, with which the Red Carnation brand has been affiliated. He died in September at 91 and his son, Brett Tollman, heads the company.

The Chesterfield, with 42 rooms and 11 suites, was open for business as usual this week.

The Chesterfield’s management and former owners had no comment on the sale, according to Stacy Madden, assistant to the hotel’s general manager, Natalie Le Clerc. The Chesterfield “integrates British elegance with southern coastal charm,” according to its website. It is well-known for its afternoon tea service in the British style.

The hotel stands on a lot of about four-tenths of an acre at the corner of Australian Avenue and Cocoanut Row.

The Red Carnation Hotel Collection includes properties in London, Ireland, Scotland and Switzerland and Africa, including establishments in South Africa and Botswana, according to its website. The website Thursday still listed The Chesterfield among its hotel and resort properties.

Built in the mid-1920s, the Chesterfield’s building initially opened in 1926 as the Lido-Venice. From 1928 until the late 1970s, the hotel was known as the Vineta and went through several ownership changes before it was sold in 1989.

Reuben Brothers bought the hotel through 363 Cocoanut Row Propco LLC, a Delaware limited liability company.. The buyer’s side of the sale also is linked to attorney Eric S. Orenstein of Rosenberg & Estis in New York City, who did not return a phone message.

The deed lists Palm Beach attorney Guy Rabideau as the contact for the seller, Chesterfield PB Hotel Property Inc., a Delaware-registered entity. Richard Launder, president and director of that company, signed the deed to sell the hotel.

Rabideau declined to comment about the transaction, and Launder could not be immediately reached.

The building is listed on the National Register of Historic Places. The town in 1991 designated it a landmark, protecting its exterior walls from significant alterations without the permission of the Landmarks Preservation Commission.

Property records show an ownership transfer was recorded at $6.5 million for the hotel in 2011. But at the time, a spokeswoman for the hotel described the transfer solely as an internal transaction that reflected “a change in corporate structure to the property.”

In March 2021, Tollman sold her landmarked lakeside estate on nearly 3 acres in the Estate Section of Palm Beach for a recorded $57 million. She had owned the estate at 174 Via Del Lago since 1987, property records show.